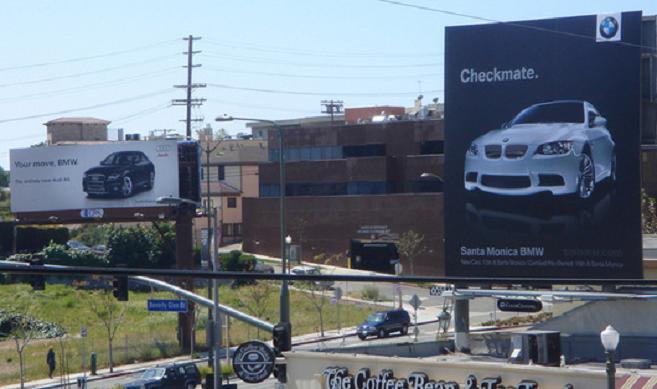 Ouch! How to Outmarket Your Competition In a daring attempt to face off with the #1 performance car on the market, Audi launches a national campaign with it’s new 2009 A4 on a billboard with the words, “Your Move BMW.”

So how does BMW respond?

This probably set Audi back a few million dollars… egg on their face and I’m sure one fired marketing exec.

Because there is no coming back from this.

In the game of chess, checkmate means “GAME OVER…You lose!”

BMW brilliantly ended the “game” for Audi….in this billboard war at least.

This is the same approach you should take in your market. Ending the game.

When a customer asks, “Wow, I didn’t know you offered this type of service…” I’d respond with, “…Normal companies don’t do this.”

I never called a competitor’s name like Audi attempted to do…never had to. The customers saw the difference in the shear confidence in barely even recognizing other companies as ‘competition’.

Boom, nail in coffin…game over.

How can you use “game-ending” language in your business? 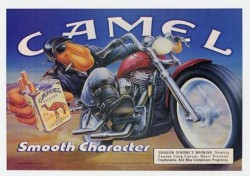 Copywriting 101: The Glorious Benefits of Smoking If you’re selling something and finding that you aren’t getting the conversions you should be, maybe you’re concentrating too much on the features of your product and not enough on the benefits. When you sell the features you are selling the steak and not the sizzle. Good salespeople don’t sell products; they sell customers on the idea of what the product is going to do for them.

Take the tobacco industry for an example. Their products are cigarettes, and when they advertise them they are selling the benefits and not the features. The benefits of cigarettes are that they can portray the user as cool, rebellious, and rugged, “sexy”, sophisticated, etc.

Joe Camel has been charged with trying to get kids to think smoking is cool, with his sunglasses and the fact that he is a cartoon. You can see this in films of the sixties and seventies, the leading man always had a cigarette hanging out of his mouth. This was not by accident; product placement in film has been around for as long as there has been film.

Another “benefit” of cigarette smoking is that it lowers blood pressure and gives the brain a slight euphoria. If you are old enough to remember any of the advertisements from the seventies, they quite often showed folks relaxing while having a smoke.

If the tobacco companies would have concentrated on the “features” during the years when advertising for tobacco was more common, chances are there would be very few brands available today.

The features of cigarettes are that they smell bad, they contain fiberglass in the filters, and they contain tar and nicotine, they’re a sure way to die a slow, miserable death and they effectively screw up the environment. Not very appealing.

Would YOU buy that?

It’s the same for any product. It’s fine to describe a feature, but if you don’t tell the potential customer what the benefits of the feature are…and how it is going to affect their life, you may as well be reading to them out of the phone book.

Features are the nuts and bolts of a product, but benefits are what get the customer to buy.

Tell a non-smoker if he buys a pack of cigarettes he’ll be inhaling tar, his clothes will stink and he’ll slowly kill himself – he probably isn’t going to try them. But tell him he will fit in better, look cool and rugged and possibly get laid…then you’ve got a lifetime customer! 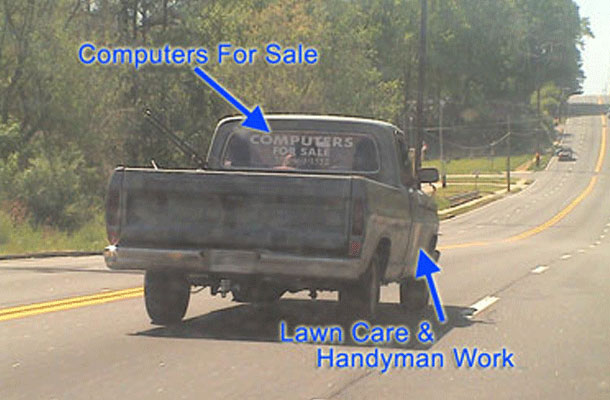 Decide What You’re Going To Be When You Grow Up

So, I’m driving down the street and I see an old pickup truck with “Computers For Sale” on the back. After I composed myself from laughing so hard, I was thinking to myself, “Would I buy a computer from a pickup truck?”

What I thought was even more interesting was that on the side of the truck, there was a sign that said “Lawn Care & Handyman Work”

Okay, is it just me or is this totally ridiculous?

Logically, even if I was convinced (which is highly unlikely) to buy a computer from a guy in a pickup truck, I surely wouldn’t want the same guy cutting my grass or fixing my toilet.

And vice versa, I wouldn’t want a plumber working on my computer either.

Let’s get it together people… and decide what we want to do!

Decide what your core business is and focus on that – ONLY. If you want to do additional things, make sure they’re in your field of expertise.

If you’re talented enough and so compelled to do something like “lawn care” AND “computer sales”, then form two separate businesses. Consumers are looking for experts. In a consumer’s mind, there’s no way that a guy who’s a great landscaper can do a good job at building computers too.